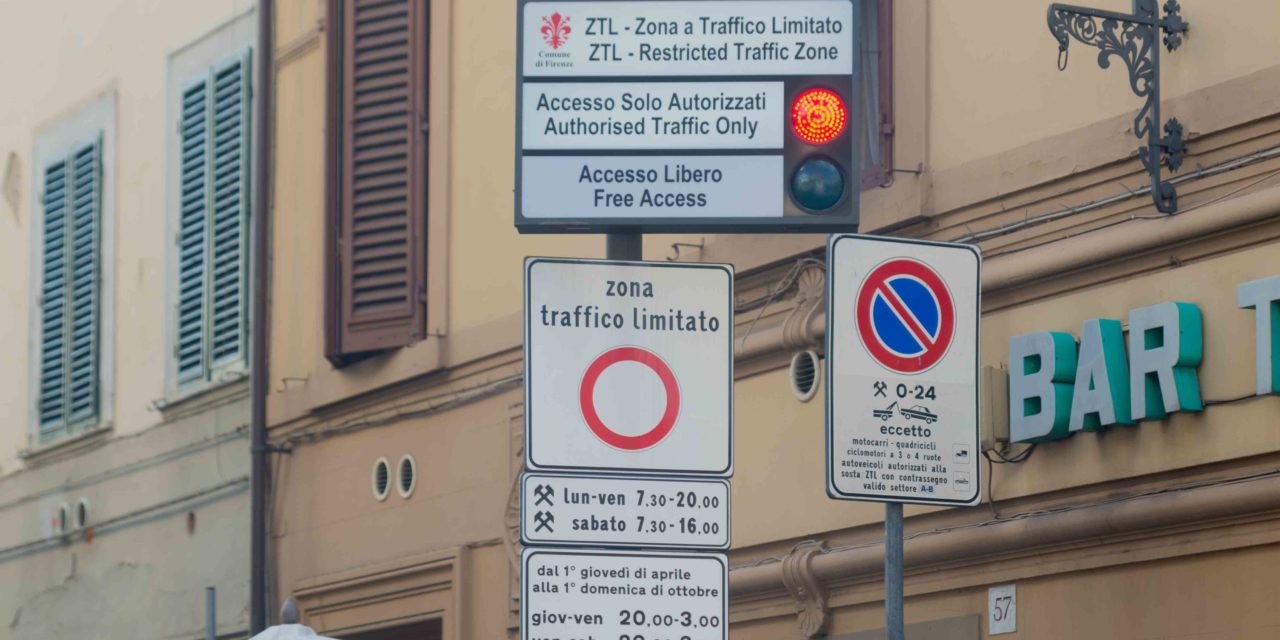 Lets start with the easy things to understand when it comes to driving in Italy. You drive on the right and pass on the left. You should REALLY consider not driving into any city if you can avoid it. If you must drive into a city make sure you understand if the city has a ZTL zone (likely) Where it starts. If you’re going near it. What the signs might look like.

The sign below is from Florence Italy.  Let me back up. You’re likely asking what a ZTL is. A ZTL is a limited access traffic area. Or in Italian Zona a traffico limitato. If the zone is active only people with authorization are allowed into it. The sign from Florence has a green/red light. It also shows the times the ZTL is active . At the time this photo was taken Monday to Friday 7.30 am to 8pm. Saturday  7.30 to 4pm. Then there is a bit describing when the evening ZTL is active. Followed by the few people exempt from the ZTL.

Confused yet? You need to see and understand that sign while driving in city traffic. Often heavy city traffic. I hope you now understand why you should rethink driving into most cities. There is no reason to drive between most Italian cities. They are normally well connected by the train system. A train you won’t need to park,fuel up or worry about traffic violations. 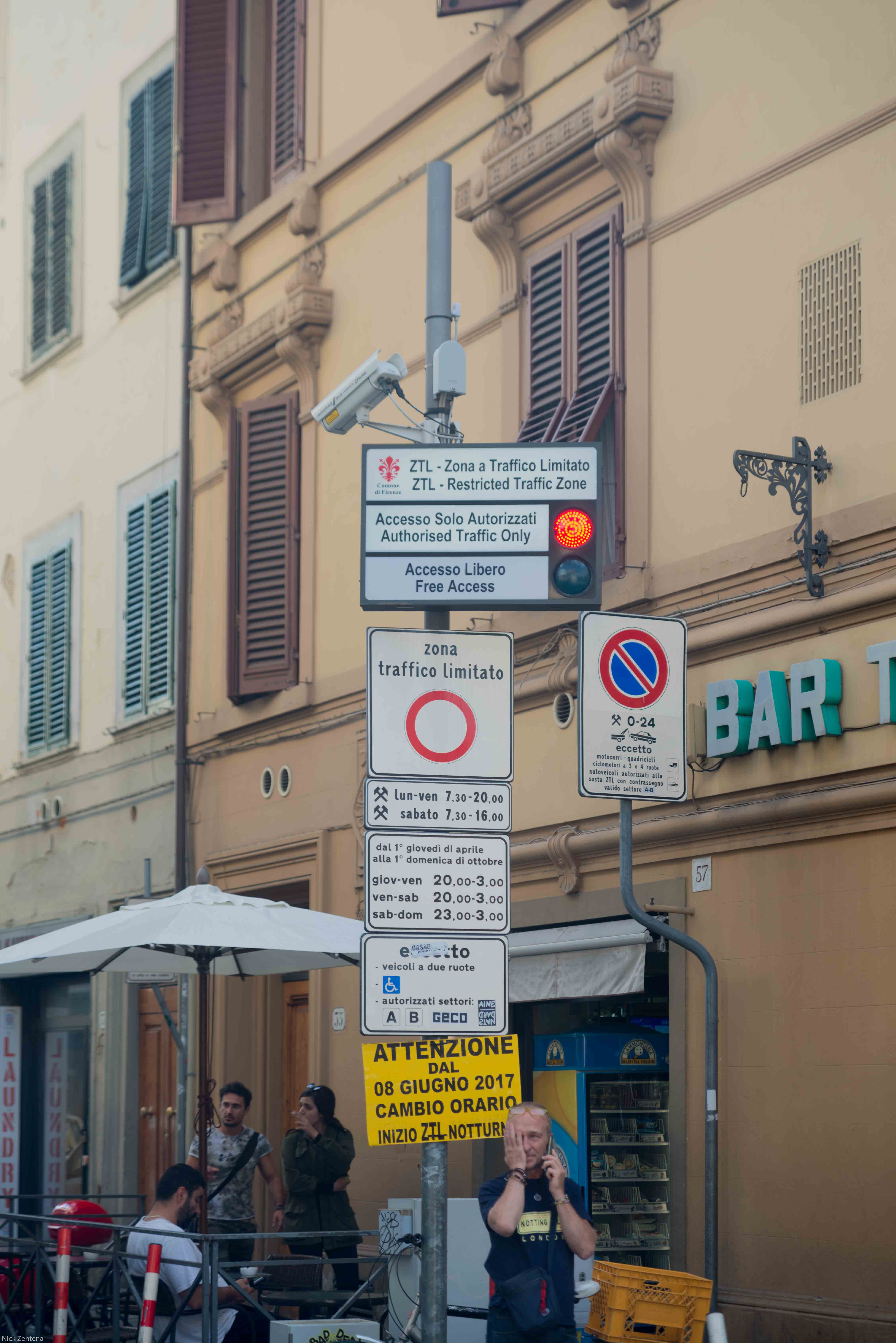 If you hold a driver’s license from outside the EU you likely need an IDP (International driver’s permit).  The IDP is something you need to get before leaving home. It’s difficult for tourists to get one in Italy and will cost you more in valuable time and money . Getting it at home is usually pain free.

Failure to obtain an IDP before leaving home risks you not getting a car from the rental office. If you do get a car and are stopped you may receive a fine. Get the IDP in advance and avoid the potential hassle.

In most of Europe the driver is supposed to know the normal legal speed limit. You cannot pass your driver’s theory test without knowing the speed limits. That means you will only see a speed limit if it different from the standard limit set out by law.

If you pass a sign indicating you’ve entered a town the sign may list a lower speed limit. Even if you don’t see a speed limit sign understand with in town limits 50km/h is the maximum speed. It can be lower.

Outside the urban area 90km/h

Fuel in Italy is not cheap. Fortunately most cars are fairly economical on fuel. It can be worth it to spend more on your rental and get a diesel engine. Diesel is cheaper than gasoline.  Diesel engines also are more efficient. The two combined will save you money if you intend to drive a fair bit.

No matter which type of engine you rent make sure you put the right fuel in the tank. A diesel nozzle won’t fit into a gasoline tank but many people have made the mistake of putting gasoline into a diesel tank. The rental company will charge you to deal with the resulting mess. Almost always the cheapest fuel at any Italian station is diesel. You can use that to guide you if unsure. Also expect the majority of pumps to be diesel. It’s not unusual for a station to have two diesel pumps for every gasoline pump.

If you input your starting and ending point in the two boxes near the view button the website will calculate tolls,distance and average travel time. The website can be very useful if you don’t know the autostrada network.

A tip when exiting the autostrada pay attention to which lane you get into. There are lanes only for Telepass (an automated system used instead of a toll ticket) Lanes that only take cards. Unless you’re 100% sure your card will work in the machine don’t use this lane either. Lanes that take cash. These are the simplest. Some exit booths are manned. Others are automated.

There is a  new law dealing with children under the age of four. Any child under the age of four must be seated in a car seat with an alarm. The alarm sounds if the child is left alone in the car.  If your current car seat doesn’t have an alarm you will either need a new seat or an add on alarm.

If you’re traveling between any of the larger cities I urge you to consider the train. Driving is something you only have to consider if you intend to visit some smaller sites. The major cities you’ll find driving a bad choice. 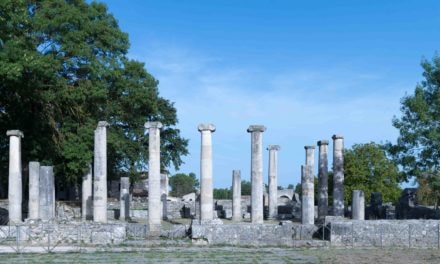 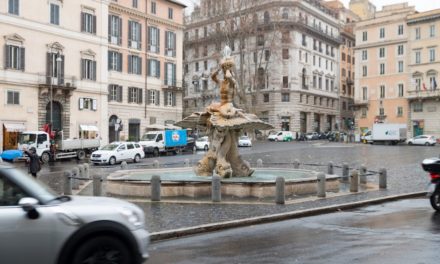 The fountains of Rome